Bones and Blades: All Sorts of Mayhem

Check out the video HERE! 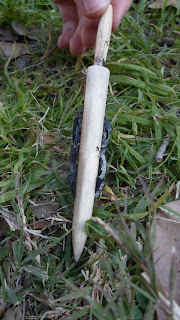 I recently had my friend Josh Lynch over to the house to throw a few atlatl darts at a rack of ribs.  He is affiliated with the Center for the Study of the First Americans, part of the Department of Anthropology here at Texas A&M University.  His research focuses on late Pleistocene/early Holocene hunter-gatherer activity along the eastern edge of the Bearing Land Bridge.  The high frequency of microblades at excavated sites suggests prehistoric hunters were using tiny blades to make composite antler/blade projectile points.  Here's why this technological choice is so cool: Stone is sharp and bone is durable...so mix the two together and you have a durable delivery system with sharp (and replaceable) cutting edges.  Sticking tiny stone blades into an antler is a fantastic way to conserve raw materials.  In the absence of abundant stone to make tools out of, pressing a few tiny blades into a sharp bone point will certainly work well.


Think of the math for a sec, I made a biface the other day that has a total of 12.5 cm of cutting edge and weighs 9.4 grams. This point cost me 70 grams of raw material and about an hour's worth of time.  The microblade/ antler point on the other hand used a total of 10 blades with a total of 12.7 cm of usable cutting edge and weighed a whopping...wait for it...1.2 grams.  The flake core is still usable and will give plenty of blades in the future.  Blades don't take much time to produce, a few seconds per blade once the core is set up.  The antler tip is the biggest time sink, yet it is also the most durable component.  Microblades in antler seems to be a great risk reducing strategy and uses a minimal amount of stone.  If you're ever in a pinch and have a little bit of stone and an antler, i suggest trying this set up first.  Unlike other blade core stuff, you don't need a chest crutch or an antler punch for indirect percussion with microblade production.  Hand held pressure flaking seemed to work just fine.

On to the Test!

We set the blades and tested the dart against two different arrow points and a large stemmed atlatl point made on Edwards Chert.  The atlatl can handle larger points than the bow so I was pretty excited to see what these bruisers would do.  I was actually pretty surprised at what the bow did too.

I'm always a little astounded at what a sharp rock flying fast will do to things.

The arrow points broke bone, unlike that little point that stuck into the bone a few tests ago.  The side notched point cracked through a rib and broke in half and the obsidian point came off in the hay after shattering on a rib.  It became increasingly clear how clever the antler/blade set up is.  These points could go all day.  The bone and stone combo is both serviceable and durable, two things that play a large part in long-term success rates.

The thing just looks mean too, like something you'd see sketched on a napkin after Rambo had Chuck Norris and Edward Scissor Hands over for arm wrestling and tree kicking practice.  Still waiting on my invite...my phone must have been off.

The microblade point melted through the meat but ran into problems when in contact with the ribs.  Not like a few blades coming out is a big problem, they would have popped out eight inches into the critter.


The Edwards Chert point needs special mention.  This point gets the workhorse award.  The point just wouldn't break, and yeah we tried to kill it dead.  I launched it into the fence and all I got was a chipped tip.  The Edwards point made gigantic holes, ca. 4.5 cm (about 2 in) and crunched up bone like it was for breakfast.  I'd be happy to have this point along for a hunt.


The Pachuca knife made a cameo appearance and worked great.  I was able to cut through the entire rack in two slices, not bad.  The cut marks on bone made by the obsidian knife were pretty neat too.  We find these in archaeological trash deposits (middens) sometimes.

All in all a fun test.  The folks in Alaska were really on to something out there.  The combination of strength and sharpness that the antler/blade set up offers is a pretty novel approach to saving raw material.  This technological choice keeps your arsenal light and easy to maintain.  The arrows did well.  The normal technological relationship still stands where arrow points a quicker to make but break faster than bone points.


I kind of want to try a weird technology, should we make and shoot those cool Paleoindian crescents?  Were they even projectiles?  Somebody chime in on that.