All Mixed Up: Assessing the Triple Cortex Typology

I was going over a few lithic coding sheets in preparation for upcoming field projects and though I'd check a few things out while making a point for an upcoming test on the blog.  Lithic coding sheets often appear very standardized, issuing group designations based on aggregate analyses and specific attribute analyses.  In following all the steps outlined in our code sheets we become comfortable that we are approaching the collection in an appropriate and meaningful manner, and that our hard work is time well spent in illustrating prehistoric behavioral patterns.  Our education and patience often pays off and lets us discuss patterning in mobility, cost-benefit decisions and different traditions of learning and acting.

But, unfortunately our methods aren't always that cut and dry.  Let's have a quick chat about the Triple Cortex Typology.  This method splits an assemblage of flakes into three categories.  primary flakes have lots of cortex on the flake surface (the weathered outside of a stone). secondary flakes have less cortex than primary flakes and tertiary flakes have no cortex and lots of flake removal scars.  This method is used to infer early, middle and late stage flaking.  Some also use it to infer distance from procurement source with varying levels of success.  At this point the lithic analysts reading this are probably thinking "He makes that sound too loose, where are the cortex percentages to separate the categories"?  Well, that's a problem isn't it?  Check out a few publications and CRM coding sheets and you will often find a lack carefully defined measurements and variable percentages to construct each of these categories.  This of course leads to unreproducible data and an inability to compare patterns between studies.  Andrefsky (2005:115-118) discusses this problem in more detail in his book "Lithics: Macroscopic Approaches to Analysis".

So that's problem number 1, that the method, while potentially helpful is often subjective. Problem number 2 is that flakes that would appear to be primary, secondary and tertiary flakes (ie, early, middle and late stage) may all be produced at the same time.  Often small chips that we would consider to be "resharpening flakes" are created during platform preparation for larger cortical flake removals.  So, While the goal may be a single large cortical flake removal from a biface, a higher volume of smaller flakes has been created in doing so.  This pattern would perhaps lead us to classify a location as a logistical site due to a higher ratio of non-cortical to cortical flakes.  The flakes produced in this case may mask the actual intention of the stone work.

I decided to collect a subset of flakes made during the production of a projectile point to see for myself how different levels of cortex (to which one might infer "stage") may be created in a mixed manner, rather than the nice linear trend we often read about in texts.  This is something I had noticed before but still like to do to see the variability produced.  Sure enough, the guide flakes and platform prep flakes that must be removed prior to large cortical flake removal are smaller and have little to no cortex.  I'm always a little surprised at the mixed nature of size, shape and cortex that is removed over the course of biface thinning.  Eventually the cortical flakes taper out, although often times they pop back up again when I  start working another margin of the piece.

So...what then.  How do we asses stages of production!? Isn't that a meaningful measure to infer mobility?  Yep, I still believe that understanding how and when individuals decide to further reduce stone is important.  Careful disclosure of what percentage one calls primary and secondary flakes is essential for consistent measures and can offer valuable information regarding where people are choosing to carry out specific parts of stone tool production.  Yet I also see larger importance in attempting this maneuver in a way that accepts the complex nature of flake production, where flake morphology can rarely indicate discrete "stages", but are rather a part of a continuum where multiple morphologies may be produced in a mixed fashion.


Check out the video to see what I mean.  Flakes of all different cortex measures are created well into the process.  Send me your thoughts as to how we might make better sense of this dilemma.  I have opinions too, don't worry. 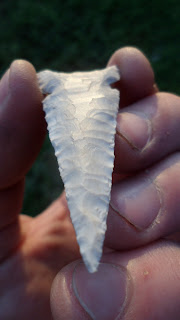 For more info on the problems associated with a strict adherence to primary, secondary and tertiary flake stages and distinctions between the types check out:

Been a little while.  For all that went, I hope the SAA meetings went well.  I had a great time and saw some great new research happening.  This is just a quick post to show what I've been working on in my spare time.  I've been playing around with the flaking sequence for serrated edges somewhat and have met with various degrees of success.  As always, there is still a ton to learn about flaking sequences for making clean serrated points.  All of these points were made with antler tools, no metal as usual.  I have gone through two antler tine pressure flakers so far.  Once the tip has been resharpened too many times you start getting into the pithy part of the antler and the tool becomes useless.  At that time it's best to recycle the antler into a knife handle.

I will be starting up a few more tests in the near future.  Anybody have some high quality basalt they can offer up?  I'm going to do a Samoan stone axe test. 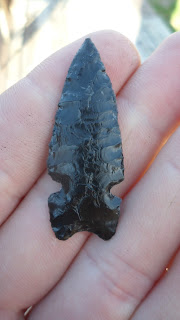 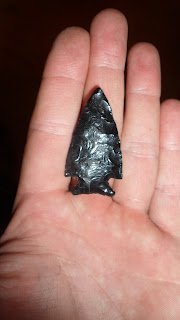 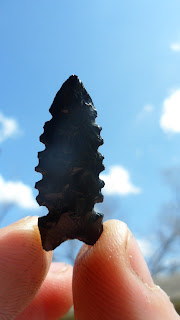 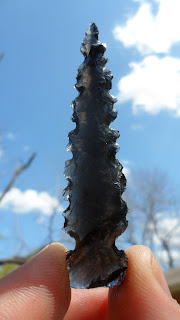 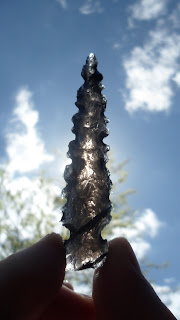 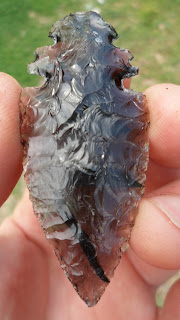 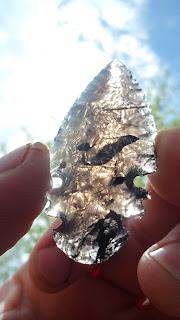 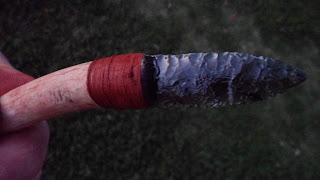 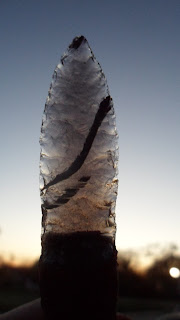 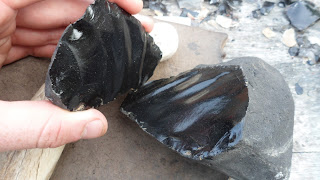 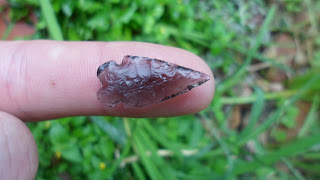 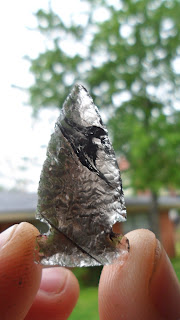 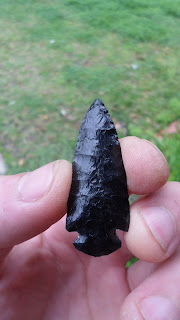