I traveled to East TX to collect a few understandings about how my arrows would fly and how the environment and prey would force adjustments to the technological approach I entered the arena with.  I took several point morphologies along for the trip (see the last blog posting).  All but one had both pine pitch glue and deer sinew wrapping to secure the point to the arrow shaft.  The main variability within the quiver came from point length and projectile base shape.  A few arrows were side notched, a form of attachment that is common in pueblo type sites.  Good examples of these are Pueblo Side Notched, Point of Pines, Awatovi Side notched.  These point types appear in the southwest after the Chaco Corner Notch tradition (ca. A.D. 750-A.D. 950) and were in use by about A.D. 1150.  Corner notched points of various morphologies remained standard issue for the following few centuries and are found from West TX across NM, AZ, CO and UT.

I also took a few other types, a small obsidian San Pedro (groan) an un-notched and un-wrapped long triangular point (fail) and an Awatovi on novaculite (RIP).  So what happened? get to it already! where are the pictures of death and destruction!!!!  I feel we need a quick sense of the environment first as it played a major role in forming my decisions and tailoring my ultimate failure.


The area consists of rolling hills and deep gullies with short-leaf pine, oak, maple, endless brambles and thorns across a landscape of sand, sandy clays, gravels and boulder outcrops. Hogs are there for sure, didn't come across any during the daytime where tracking by a blood trail would be possible.  Rabbits come out in larger numbers at night in this area and created quite the challenge.  I managed to track three deer and got within 30 yards but we don't shoot them here.  I fixed an LED flashlight to my recurve bow and set out.  This is not to say I stopped hunting during the day, on the contrary, I put in about 16 hours of daylight hunting.  Night hunting was a lot of fun.  The restricted vision, frost, breath vapor, rain, mud and blood made it eerie and terrific!


So here's the breakdown:

Total of 30 hours hunted over two separate two-day forays
16 shots on prey, 1 arrow lost, 1 separated from haft, 1 broken at tip and retouched, 1 broken at base. 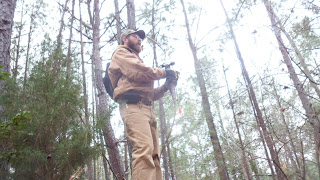 With this track record things look terrible. But!  Skills did improve greatly over the course of the hunts, meaning I missed by smaller and smaller distances :)  As the recurve bow doesn't have sights one must use what's called "instinctive shooting" where you look at the target and trust your brain to compute the correct trajectory.  It works great with a little bit of practice.  Also, rabbits with a flashlight is a little ambitious regardless.  I managed a rough average of 1 shot on target for every two hours of hunting with a total of 4 arrow mishaps (lost or broken).


Imagine I were to hunt three times a week for a month, with increased skill or luck shots accounting for some level of survival.  At the current rate I would submit 12 arrow points to the archaeological record and break and rework a point at least 24 times!  Seems some continued practice is in short order.  When we consider the possibility to lose up to 144 arrows a year, think of the deposition by one hunter over the course of a hunting carreer, epic!

Now take that to the band level, of which perhaps 15-20 individuals are active hunters.  The main caveat here is that they would have begun training at a young age and would be quite proficient in local hunting methods.  Regardless, if each person in a hunting foray lost one point per hunt at three hunts a week that would total 168 points to the archaeological record every month, wow.

Ok nerd time is over...The hunts were a lot of fun in a beautiful part of the planet.  Great lessons learned and more to come. 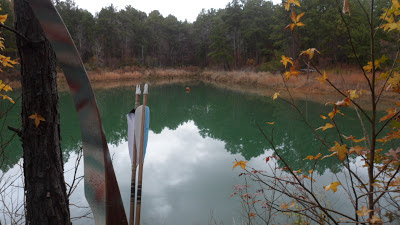 Coming up next!!!
How did the natural environment force changes in point morphology? Yes it did, and yes it worked better.