Battle of the Barbs: Foreshafts of Doom

Prelims took up some time, it's good to be back behind the bow.  Check out the video HERE! 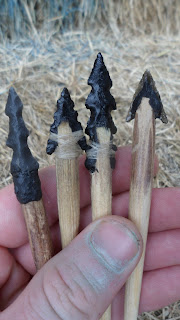 I've been wanting to make an arrow from a stand of cane in the back yard for a while now.  It turns out to be a little challenging but well worth the time.  I'll do a post about making those later on.  Since it's hollow, cane allows for the use of foreshafts, meaning the arrow has two parts, a mainshaft and a foreshaft.  This composite weapon has a few distinct advantages over one-piece or "self arrows".

Here's how it rolls:  One can reduce the amount of transported weight by carrying a only a couple of arrow shafts and a whole clutch of foreshafts.  The foreshafts can be quickly replaced when you break a point or after the main shaft falls out of a hit animal.  This idea of interchangeable parts is great! instead of carrying a ton of arrows around you just carry the tips and change them out as needed.  And you know what? A little secret...foreshafts work great as knives too.  This type of technology has all the traits of an item you want with you: light weight, replaceable, multipurpose, deadly.

On to the test! 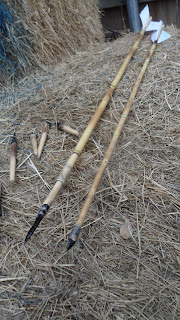 I had some raccoon meat left in the freezer from a hunt with my brother (congrats!) a while back.  While really good in stew, no kidding, the meat had freezer burn and was put to use as a test target.  I like to use meat with bones in it as it presents a realistic test of projectile/animal interaction.  I harp on this all the time, but it remains true, prehistoric weapon systems were constructed to kill stuff, not to be found by archaeologists and drooled over. As such they were tailored to break bone, lacerate, and kill through blood loss. Awesome...I know...I know.  Shooting through bone and sinew gives a realistic idea of breakage ratios and projectile performance.

I made two cane arrows that ran the spectrum of size and technology.  The larger shaft was fitted with interchangeable foreshafts and the smaller arrow had a single point lashed with sinew and pitch.  This would give me an idea of how the two types stack up.

I made two versions of Snaketown points, specifically a Salt River Indented Base and a Snaketown Trangular that I took a little liberty with and gave a stem to.  These point types come from the Santa Cruze phase of the Hohokam and date to ca. A.D.850-1000 in Central Arizona.  Some authors have proposed that these ornate points were the work of specialists engaged in competition for prestige through a display of skill.  I can get on board with that to some degree.  Read up on Hohokam culture, their ball courts are pretty cool.

I also made another Pueblo Side Notch of the Buck Taylor variety (ca. A.D. 1400-1800 Central AZ) and a Sobaipuri point (A.D. 1500-1800 Central AZ).  All points were secured with pine pitch and one of each point type was fastened with deer sinew.  The raccoon meat was shot with the composite cane arrow from a distance of 15 yards with a 45lb recurve bow.  I used a new type of fletching call flu-flu fletching (odd, yes) that makes a cool zip sound as it flies.  The big fletches are actually super stable in flight.

All but the larger Snaketown point broke.
The Sobaipuri point was only attached with pine pitch and as such failed miserably.  I had high hopes but it just didn't do the trick for me.  The Buck Taylor serrated did its job and gets a gold star.  These have become my go-to point for hunting along with the Walnut Creek.  The Snaketown points stood up well and made some unique damage .


Oh, the arrow with a the single hafted point broke on the first shot and was benched.  The composite arrow was used for another 30 shots or so and tips were easily exchanged. Composite wins, hands down.

As opposed to the slice-like cuts that your run of the mill lenticular points make, the Snaketowns powered through bone and made star-shaped holes.  I was surprised at the tenacity these points have.  As the barbs rotate they cut a big rounded hole, somewhat like a bullet wound.  The Buck Taylor made cleaner cuts until it exploded on a bone and caused some rather brutal trauma, check the end of the video for that, yikes!

All in all a fun test that gave some interesting results.  The diamond cross-section with barbs cut star-shaped holes and punched through bone.  The lenticular cross-sectioned Buck Taylor made knife-like wounds and then caused the most damage of them all in the end.  I'm not sure what to make of that little Buck Taylor, it gets the gold medal for overall tissue damage while the Snaketowns get the prize for big bone-crunching holes.

And I didn't even hit a deck chair!

I'm taking suggestions from ya'll...what should we do next?